The China Accord: The Next Step in Stopping Global Warming

The China Accord: The Next Step in Stopping Global Warming 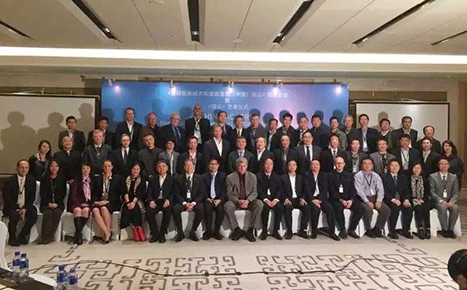 As architects, we can do more to help mitigate climate change. The built environment is a major contributor of greenhouse gas emissions, and we can turn that around. But it’s not enough to act sustainably in the United States and in Europe. China now produces about 30 percent of all carbon dioxide emissions worldwide each year, as a result of its rapid economic growth and fast pace of urbanization. That’s more than the United States and the European Union combined.

Based in Santa Fe, the nonprofit organization Architecture 2030 formed in 2002 to offer a practical path to achieving carbon-neutral buildings by the year 2030. The movement has taken on tremendous traction in the states. Professional organizations, communities, and governments at every level have set up goals, incentives, and legislation to help reduce global warming. But its influence has mostly been domestic—until now.

Last fall, Architecture 2030 and the China Exploration and Design Association’s architecture branch hosted a meeting of global design and planning leaders. The goal: to start a similar collaboration to reduce carbon emissions in China’s built environment. At the meeting, the attendees signed the China Accord, a commitment to plan and design cities, towns, developments, and buildings to meet low-carbon or carbon-neutral standards.

The effort started with a broad range of the most influential organizations, both foreign and local, and with heavy support from government. Signatories include international design and engineering firms like Arup; Skidmore, Owings & Merrill; the DLR Group; Gensler; and Moore Ruble Yudell, as well as more than two dozen Chinese firms.

This is the first effort to share this kind of partnership approach to China, and the first of many steps to raise awareness, align priorities, and create partnerships for progress in China. What’s next? Symposia, exhibitions, project tours, case study panel discussions, and other efforts to help cross-pollinate knowledge between Chinese and foreign designers and engineers.

At the moment, the China Accord is a position statement. It identifies a direction and a range of targets. But there are no set benchmark commitments yet. Future steps will involve finding ways to measure the progress of China Accord members, similar to the framework that the American Institute of Architects’ 2030 Commitment provides to help firms evaluate the impact their design decisions have on an individual project’s energy performance.

To change the status quo in China will involve not just the building industry, but also local politicians, of course. Fortunately, the central government is already establishing challenging energy targets for each region and pressuring local design institutes to support them. Architecture 2030 founder Ed Mazria’s idea, however, is that even on its own, the building industry has an opportunity to make smarter choices that have a big effect.

Hopefully, someday the idea of environmental responsibility would be integrally part of the way things work in every region. And we wouldn’t need a global calamity for people across the world to see the benefit of working together and sharing knowledge across borders. But setting up this forum in China is a big and promising first step. This is only the beginning.